The Grot, or grotto, was built in 1668 by Sir Daniel Fleming and designed as a place to frame and enjoy the spectacular Rydal Falls.

The Grot & The Waterfall at Rydal Hall

The Grot, or grotto, was built in 1668 by Sir Daniel Fleming and designed as a place to frame and enjoy the spectacular Rydal Falls. It is one of Britain’s earliest examples of a viewing station. William Wordsworth was particularly fond of the Grot, writing about it in one of his earlier poems ‘An Evening Walk’ and visiting with his nephew shortly before his death.

From the window, a bridge across Rydal Beck, built by Sir Daniel Fleming in 1682, can be seen. This stone bridge probably replaced a previous wooden structure. The Beck descends as a waterfall, called Low Falls, into a plunge pool and continues through a gorge, which frames the falls and casts shade upon the scene. This small building called the Grotto (listed grade II*), was built by Sir Daniel Fleming in 1668-9. He referred to it in his accounts as the 'Grot' and 'my Grott-House'. It is a simple stone building with a door on the south side and a large window on the north side giving a view of the waterfall, the plunge pool, and the bridge above it.

The interior was originally panelled, and Sir Daniel's accounts show that the cost of the panelling and glazing amounted to more than the cost of the rest of the building. Rev. Thomas Machell described it, in 1692, as 'a little grotto... [for] retirement' and the view of the fall from it as 'very surprising'. Sir Daniel had the scene from the window painted in 1682. This building is unique: it is Britain's earliest known purpose-built viewing station.

This area became a popular attraction in the later 18th century. The visitor was led along a route to the summer house in such a way that the view of the waterfall was not visible until the door was opened, revealing it framed by the window in the opposite wall. The view from this spot was commended by Thomas Gray in his Journal of 1769 and by Gilpin in 1786, amongst many others.

The scene was described in verse by William Wordsworth in An Evening Walk, and the falls were painted by Joseph Wright of Derby in 1795, Julius Ceasar Ibbetson in 1798 and drawn by John Constable in 1806. The scene has been described as a 'beau ideal of romantic and Picturesque scenery'.

Please note that because of our environmentally friendly policy, we do not permit swimming in this area. 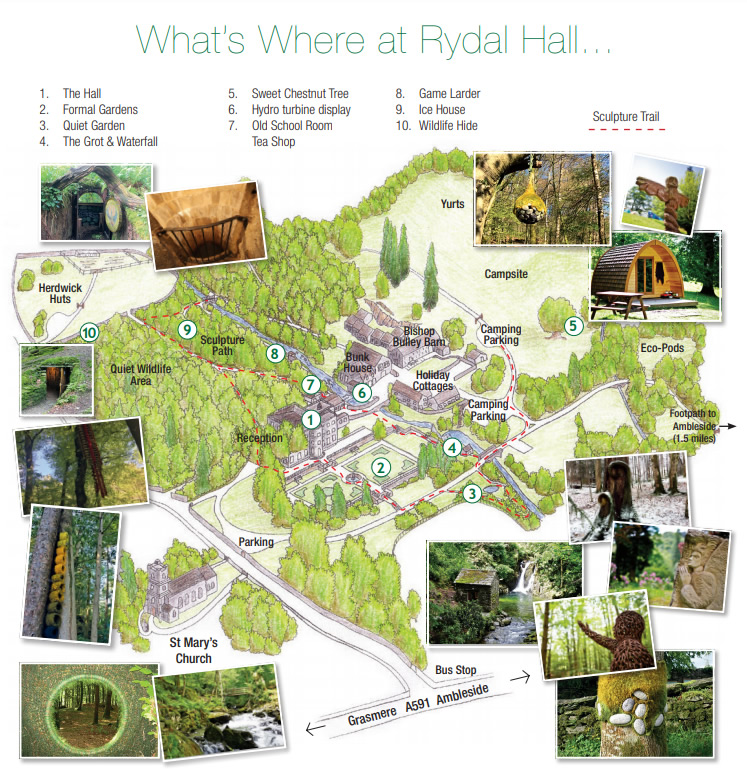 How to find us

Why not treat someone special? Gift Vouchers make an ideal gift and they are available for use in our Tea Shop and towards accommodation.
To order a voucher please call: 015394 30830 or send an email

Never miss a thing, sign up to receive our latest news and special offers

To make a booking